APC and the Niger Delta Avengers: Who caused what?
Uncategorized
by Tony Osborg

APC and the Niger Delta Avengers: Who caused what? 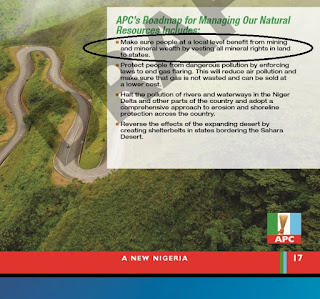 Between a party (APC) that promised to give back the crude oil to the Niger Delta people and their states if elected into the central government but refused to do so when elected.

And between a group of people (Niger Delta Avengers) who use ‘violence’ to remind the party (APC) to fulfill its campaign promise.

Who among these two is the cause of the problem?

Below is page page 17 of the APC Manifesto -‘Roadmap to a New Nigeria’ where it promised to give back the resources to the local people. Another promise Cancelled

I am confused. It looks like we are all guilty here