APC as a 419 Party in Nigeria!
Uncategorized
by Tony Osborg 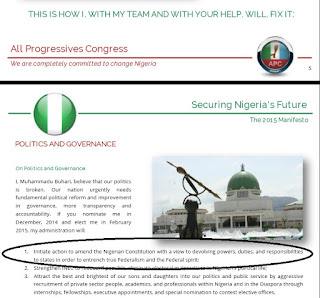 How do you define 419 in Nigeria?
Below is a screenshot of page six of the APC Manifesto which was signed by President Buhari.
Before the 2015 general election, the APC released its manifesto, explaining how it will change Nigeria for the better.
The Number ONE promise in the manifesto is that APC will ‪#‎RestructureNigeria‬ and entrench ‪#‎TrueFederalism‬ if elected into the central government.

Intelligent but gullible people like myself fell for this scam and launched full attack on the PDP/Goodluck government and gave Nigerians reasons why they must not return PDP to Abuja.

President Buhari and the APC are fantastic 419ners for deceiving people like me.

Quote me. A party that employ experts to write its manifesto prior to election but decides to employ clowns after election to run its government is nothing but a fantastically corrupt party. That is nothing but fraud, 419, precisely.

The manifesto begins with a promise on true federalism by asserting that if the APC is voted into the central government, it would;

“Initiate action to amend the Nigerian Constitution with a view to devolving powers, duties, and responsibilities to states in order to entrench true Federalism and the Federal spirit…”. It also went further to state that it would “Make sure people at a local level benefit from mining and mineral wealth by vesting all mineral rights in land to states.”