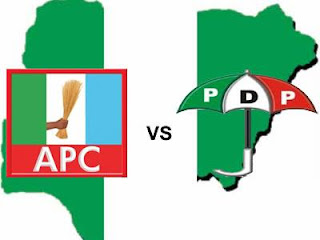 While it is true that the PDP is a corrupt party that has looted Nigeria for the past sixteen years, let us not forget that like Saviola Godwyn rightly said;

“In 1999, PDP met nothing except a pariah nation. The Party met monumental corruption including the money that the Abacha family is still returning today. They met an economy without the likes of MTN, Airtel, Glo, Etislat, Dangote Cement, NIPP, privatized NEPA and many more. There were no agencies like ICPC, EFCC, to fight corruption. No regulatory agencies like NERC, NCC, PPPRA etc,. No due process or procurement Act, no UBE Act and many other laws. No Communication satellites, and many other creations of the PDP. An eldorado Nigeria was not handed over to PDP. In fact, there were no card readers to conduct elections until the PDP brought them into our electoral system.”

Yesterday, the corrupt PDP created EFCC to fight corruption and placed Nigeria’s name on the list of the fastest growing economies of the world, today the incorruptible APC has made Nigeria’s name disappeared from the list of growing economies and has given more priority to fighting corruption. Today, we have APC and the party is focused on fighting corruption, after its first four years, Nigerians will ask, ‘at least we know what corrupt PDP brought to the table even with their blatant corruption, what new product has the incorruptible APC brought to the table of Nigeria?

My advice: While fighting corruption (which is nothing really special though), President Buhari and the APC should please pay more attention to the economy, diversify and unite Nigerians. The APC must discard this skewed, flawed, corrupt, unitary ‘feeding bottle’ federalism that we currently practice and agree to #RestructureNigeria into a competitive, efficient, productive, competitive, and locally driven #TrueFiscalFederalism, just like it promised in its manifesto.

NB: I support fight against corruption but I do not think making the fight a daily breaking news is worth it. Our economy is drowning and we need to restructure this big for nothing giant of Africa ASAP so as to put it back on the path to greatness.