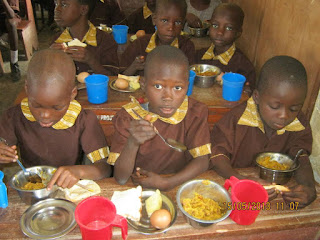 Yesterday, I read somewhere on an old billboard in Port Harcourt about the APC plan to feed primary school students if elected into the central government. Also, I have seen Nigerians write about this issue, free meal for primary school kids.

The truth is that, that campaign promise was a joke, or better still, a scam.  Feeding ten million kids per day at the rate of 150 Naira per meal will be at about 1.5 Billion Naira daily. That should be 532.5billion Naira yearly, impossible! I  do not want to believe that any government will be willing to spend 1.5 Billion Naira daily in feeding primary school students under our present economic predicament, even if the economy was at its  boom, it was still impossible . What end does this charitable sympathetic policy intend to achieve?

Osun state tried such in the past, today they have almost gone bankrupt! Buhari’s led Federal Government should not think of implementing this promise, please. Nigerians would only have seen the trick in this campaign promise if they had asked the same question I had asked before the election, which was , ‘since basic education is on the concurrent list, why has the present(then) controlled APC states not begun this free meal per day program for basic students?’

What I think the President Buhari/APC led Federal Government needs to do is to simply restructure Nigeria into a #TrueFiscalFederalism .  That should solve most of the problems in Nigeria and allow states to compete amongst themselves while the Federal Government do more important things.