Globalization: Can Nigeria Bake Its Own Bread?
globalization Nigeria
by Tony Osborg

Globalization: Can Nigeria Bake Its Own Bread? 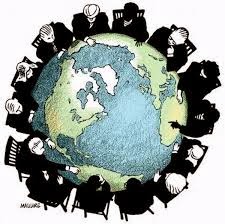 Globalization: Can Nigeria Bake Its Own Bread?

The African continent which is fond of putting blames of its failures on its inability to fully recover from the shackles of colonialism has only come to realize that it has found itself in a post economic imperialistic situation. This I believe is a product of Africa’s inability to neither understand that although it has lost the war in the past, the current battle for economic survival is far beyond hatred nor need for oppression but on the simple basis of economic survival which it must embrace.

Since Nigeria has refused to fully embrace the present realities as it is– the importance of science and technology, the redundancy of religion, the need for pragmatic international relations and the contingent military strengths, etc. and has rather continue to accept the world the way it has choose to see it – the supremacy of supernatural belief over human intelligence, the sacredness of tribalism, the abuse of democratic tenets, inability to appreciate scientific truth, its desire to be lifelong importer of finished products, etc. then one would imagine how soon such a country will attain self-reliance.
One would wonder why Nigeria is so backward in terms of development as it is perceived in the modern time despite its huge natural and human resources.

I will argue that globalization is one reason why Nigeria and Africa at large has made such ‘slow’ progress and is probably the same reason for our continuous dependency on western economic survival. One would imagine what contemporary African nations can do without the help of western powers. Can this Nigeria, without foreign aid, bake its own bread, sew its own garments, drill its own oil, produce its own cars, fly its own planes, design its own cities and fights its own wars? What has globalization got to do with all this, one would ask?

Globalization promotes relationship, be it passive or active, negative or positive. If Africa has suddenly become a passive and negative part of this worldwide relationship, it is simply because of its nonchalant altitude towards embracing the realities of its time. Africa is simply a lazy continent with ignoramuses as leaders, bigots as teachers and religiously partisan oriented learners filled with egomaniac tendencies.
If globalization truly means “all those processes by which the peoples of the world are incorporated into a single world society” as defined by sociologists, then it will be true to say globalization is an inevitable phenomenon that has come to stay. The issue becomes not how it affects Africa but how African countries like Nigeria can take advantage of its processes. China, unlike Nigeria, rather than open up its negative archives to its students for learning and therefore building up the same old unproductive orientation, took a new dimension. It embraced the scientific and technological innovations while sanctifying its primitive cultures. Rather than promote the building of churches and mosques on every street like is widely practiced in Nigeria, it went into building manufacturing outfits on virtually most streets producing not just for its one billion populace but also for the millions of idle religious people of Africa. This is how China has survived! Today, Africa depends on China for most of its cheap electronic gadgets, fashion, engineering, exploration, etc.
Democracy, religion, education and terrorism have all become practicable norms all over the world- thanks to globalization! A walk around a Nigerian market will give you a clear picture of where Nigeria stands on the globalization index. In Nigeria, the phones are made in either Finland or China, the rice and flour is either from India or Thailand, the drugs and pedicures are either Indian or Chinese, the furniture and wares are either France or Italians. The automobiles, arms, computers, clothes, etc. are America’s and their refined petroleum products are from Brazil. In Nigeria, our leaders go abroad for basic medical checkups and even the African ladies prefer the Brazilian and Malaysian hairs over their unique traditional pearl hairstyles! Now, one can begin to see why unemployment is on the rise in this country. We lack the basic framework of taking advantage of globalization and have now ended up becoming a major consumer of finished products from across the world, all at the expense of our little income from sold natural resources.

In this romance called globalization, Africa has certainly taken a position – a passive partner. The sooner the African people wake up to accept that the world is no longer interested in listening to such sympathetic stories of ‘effects of colonialism’ and stuffs like that, the better for the continent. Africans must realize that it lives in an intrinsically competitive world where no region or tribe claims monopoly to any given scientific knowledge or invention. Whatever is been produced in the USA can be produced in China and in Europe and in Nigeria. Knowledge is the same, technology is the key and job creation through productive creativity is the goal. It all depends on how well you play your cards and how determined you are to take a position on the globalization index. South Africa is a good example of few African countries playing their cards well. One would imagine how Nigeria came to overtake them overnight even with the existing structural deficits.