President Buhari Erred in That Speech
Uncategorized
by Tony Osborg

President Buhari Erred in That Speech 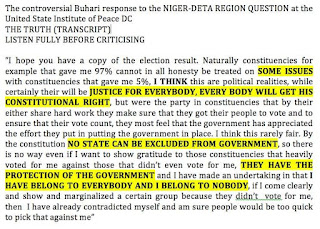 Some years ago, after an election, the former Governor of Delta State, Dr. Uduaghan said to the people of Udu in a meeting, ‘you people did not vote for me… you should not expect anything from my government… I have no business with Udu…”.

We actually dragged him to court over that statement and if Delta State was a state with the rule of law, that statement was enough to impeach the then Governor. But as usual, nothing happened and he obviously later apologized and stated that he was misquoted. That was after he had felt the heat. And in the end, he did not neglect Udu like he had initially threatened. This happens a lot in Nigerian politics.

Years later, the new president of Nigeria has made a similar statement but in a more technical manner. In a sane country, such a statement made by the President, though an honest statement, should be translated into an impeachment call. Protests should be hitting the major cities by now, calling for the resignation of such a President.

Politicians often habor resentment over a people’s voting pattern  but to express this in percentage and in such an open manner is a call for anarchy by the Presidency. He needs to clarify this.

You cannot ignore the 5% voters who did not vote for you but whose resources it is believed, the country depends on (at least for now) to carter for the 95% voters that voted for you. This will be like sending a wrong signal to the whole country.

The mention of ‘election result’, ‘vote’, ‘95%’, and ‘5%’ in that speech was unnecessary and is obviously difficult to defend. Besides, the answer given was not related to the question that was asked by that lady. The lady’s question was not even answered by Mr. President, her question was ‘…tell us how you intend to approach (the Niger Delta) with particular reference to the amnesty, bunkering and inclusive development?” and Mr. President went to mention ‘election result’, ‘vote’, ‘95%’, and ‘5%’. This was totally off point.

The first and second statement was unnecessary in this speech. The last statement was all he could have just said to avoid this kind of situation.

Anyway, outside this distraction, I still strongly believe in the Buhari’s central government. I still have that feeling that Nigeria is safe under his leadership.