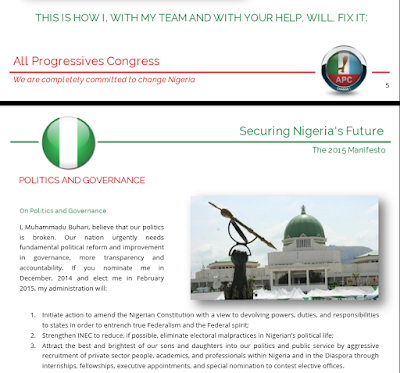 Above is a screenshot of page six the APC Manifesto.

During the election, General Muhammadu Buhari and the APC promised to #RestructureNigeria into #TrueFiscalFederalism if elected into office.

Today, the General has become President and the opposition APC has become the ruling party. Yet, nobody is saying anything again about True Fiscal Federalism.

The first promise on the APC eighteen page document is to restructure Nigeria. Read the except below. PMB said

If you… elect me in 2015, my administration will: “Initiate action to amend the Nigerian Constitution with a view to devolving powers, duties, and responsibilities to states in order to entrench true Federalism and the Federal spirit.”

There are over forty-one promises contained in the APC Manifesto, eight months later, we cannot point out to one specific promise that has been kept despite their government receiving over two trillion Naira in allocation. Even the promise of ‘fight against corruption’ has not been kept as no one is yet to be convicted under the APC government!

First, for Nigeria to make progress, we must discard this skewed, flawed, corrupt, unitary ‘feeding bottle’ federalism and constitution that we currently practice and agree to #RestructureNigeria into a competitive, efficient, productive, competitive, and locally driven #TrueFiscalFederalism.

Is it a crime to ask a President and his party to implement a promise in their party manifesto?

Join us as we demand that PMB and the APC fulfill their promise and restructure Nigeria into True Fiscal Federalism so we can put our beloved country back to the path of greatness.